Curien’s mad experiements are on the loose throughout the entire mansion grounds that you will encounter in the first game of the series. Not only they are created to kill, they also have names as well.

“Yes!… these are the kinds of breakthrough results that are possible when experiments are carried out scientifically, without undue mushy sentiment for the human test subjects or other ridiculous ethical qualms…” (journal entry) ~ Dr. Curien

Sam (TYPE A-1)
The most orthodox zombie. You will encounter him at various locations.
Well in a group because they are infested, and if you let your guard down, may also be enclosed. Their appearance is not only one type. The main method of attack is to bite.
Curien’s Notes: The Sam series is where it all got started. The rotting-zombie stagger, the dangling intestines, the lovely cyanotic blue – in some way I consider it to be my masterpiece. That’s why I made so many of them. I’ve given them free run of the DBR grounds, and am sure they’ll greet you with great hospitality in the best Curien tradition.

Nail (TYPE A-2)
His damage pattern is as same as Sam, but he can move more quickly. He is often suddenly appear from the shadows. In many cases, he strike while rush, or bite you. You will see him at every stage except the final stage.

Cyril (TYPE A-3)
His weapon is the hatchets of two in both hands. His damage pattern is as same as Sam. He strikes with a hatchet or throws it from a distance. You can shot it down. He goes away after throwing own hatchets.

Kageo (TYPE B-1)
Zombie whom the skin has mummified. The character design is modeled on a Japanese. Main method of attack is to bite or strike. He beat on the left hand or right hand or both hands.(at random) His motion is slow.
Curien’s Notes: After my experience with those gloppy Ebitans, I decided to try out something a little drier for a change. So I cooked up this Kageo series, loosely based on a Japanese model I ran across in a trade journal. They seem to favor humid spots, to keep from drying out, and they like to attack by biting. But then, who among us doesn’t?

Bourbon (TYPE B-2)
He looks green because his whole body is wrapped in moss. He is often suddenly emerge from behind a pillar. Dank place is liked by them. His stamina is more than Kageo. The main method of attack is strike with both hands. In some cases, it’s better for you to shot the hand than the head.

Ebitan a (TYPE B-3)
His whole body is corrupt, the skin is sore. He can live in water. Therefore the advance of corruption of his body is early. Main method of attack is to bite. He rush to the player, or jump from the water.
Curien’s Notes: I don’t know exactly what happened here – I was really just puttering around the lab, seeing what I could come up with, and the Ebitan series is the result. I like to consider it a learning experience, not a mistake. Granted, they’re hideously ugly and they melt – but they have some flaws as well. For one thing, I can’t keep them out of the swimming pool. 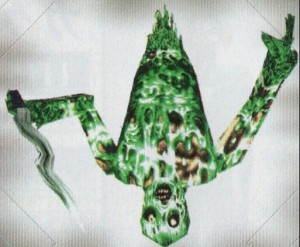 Ebitan b (TYPE B-4)
He lost the lower half of the body because his body is rotten than Ebitan_a. He is hanging on the ceiling of the passage. Or slash you with a knife from above. He has the ability to defend own face from your attack with a knife.

Robert (TYPE D-4)
Zombie like Simon. But his left side of body is covered with iron armor that repel bullet. Because also half of the head is protected by iron, it is difficult to aim at the head. You can’t damage parts that are protected. The main method of attack is strike.

Simon (TYPE D-1)
Zombie who has high durability because made from trained body. His feature is the bare muscles. Maybe he destroyed the furnitures of Curien Mansion. Main method of attack is strike.
Curien’s Notes: Hey kids – now you can make your own Simon series zombie at home! PUREE 280 lbs. of canned ham, 4 quarts of recombinant DNA and a pinch of Doc Curien’s ™ animating powder. JOLT with 2.5, gigawatts to a gluey consistency. COOL in a mold, 6-8 hours, until gelled. GARNISH with teeth and fingernails to taste.

Gilmore (TYPE D-2)
Zombie with a mighty hammer. He is atrociously, and his physical strength is quite high. Hammer is always thrown from his right-hand side by both hands. You should aim at his hand or head. 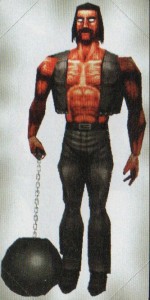 Harris (TYPE D-3)
Human type zombie with an iron ball in one hand. He swinging an iron ball and hurls it. You can’t shoot down thrown iron ball. That is , if you can’t attack before he throw the ball, you must damage. He will rush to you after throwing the ball.

Samson (TYPE C-1)
Chainsaw-wielding zombie. He has the highest strength. His right hand does not damage. Therefore you can’t shoot his right hand to fend off an attack using a chainsaw. It may be desirable shoot the head.

Bentley (TYPE C-2)
Fat zombie very similar to Samson. Attack patterns are rushing to player, throwing a barrel, or throwing a drum. (After throwing a barrel or drum, he rush.) You have to fire high because he is the rush type and has a high strength. 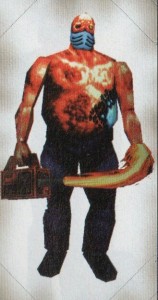 Burner (TYPE C-3)
An improved version of Samson. He has a flamethrower. The main attack is to slash you with flame like a sword. His right hand does not damage as same as Samson. Therefore it’s better to aim for the head. He appears only in the third stage.

Rubin (TYPE E-1)
Zombie armed with iron nails in his hands. He can move quickly because he is smaller than other human type zombies. He scratches you on iron claws after he rolls the forward or backward. In many cases, he appears along with Drake. The moment of landing is a good chance to aim his head.

Drake (TYPE E-2)
He throws small knives. His looks is very similar to Rubin, and appears along with Rubin. Knives is in his hands. You can shoot thrown knife down. When he lost both knives, hurl himself at you.

Moody (TYPE E-3)
He throws iron nails with right hand. He looks like a cyborg rather than a zombie. Motion pattern is similar to Rubin or Drake, but he has many attack pattern.(climb wall and throw his weapon. etc…) You can shoot down thrown weapon. 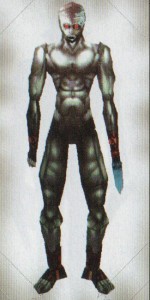 Parlor (TYPE E-4)
His stamina is lower than Moody, but the volume per one shot that you can work damage on him is limited. So it may difficult for you to kill him. Main attack pattern is to throw knives that is similar to Drake’s attack. But his weapons are the laser knives. He can throw it infinitely. Basically, two the enemies appear at the same time. Position of thrown knife is higher than Moody’s. 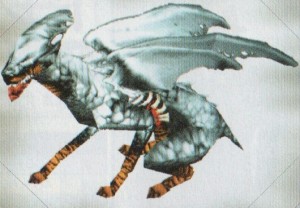 Kenfis (TYPE F-1)
This zombie looks like a dog with wings, but can’t fly. Main attack pattern is to bite. It is difficult to take aim because he approaches while bouncing from side to side. They have several different body color or stamina. The stamina data is the average value. 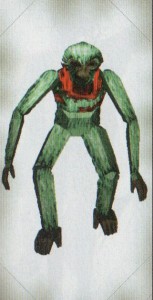 Saruzou (TYPE F-2)
This zombie was made from a improved macaque (Japanese monkey). He approaches while jumping and turning to scratch you. You will be at the mercy of his diverse and fast motion. They have several different body color or stamina as same as Kenfis. The stamina data is the average value. 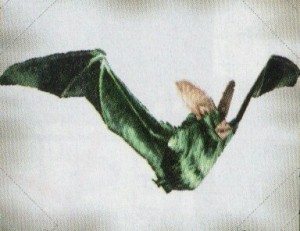 Devilon (TYPE F-4)
This zombie was made from a bat. He is usually hanging from the ceiling. And if he found human beings, pounce on them. Main attack pattern is to rush. His attack will raging in the boss battle of the second stage.

Bueel (TYPE F-3)
This zombie was made from a giant frog. Therefore it inhabits only watersides. It will pounce on you to bite. You should be careful when you are in waterside because it may appear suddenly from the water. 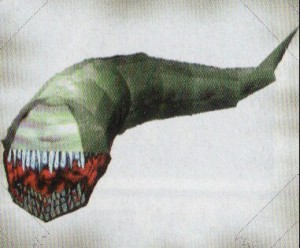 Murrer (TYPE G-1)
Snake-like Zombie. Do you think it’s a caterpillar? No, it’s a snake. It will meander, and suddenly pounce you. In many cases, you will see more than two them in one scene.(from 2 to 5) Its head is lost when you shot it. 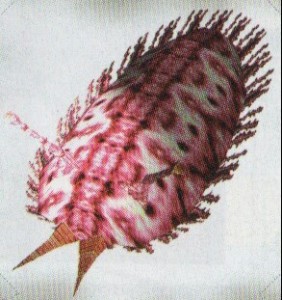 Name (TYPE G-2)
This zombie was made from a slug. Main attack pattern is to spring at you after coming close. In another case, it spits mucus while clinging to a wall. It exists only in the first stage. 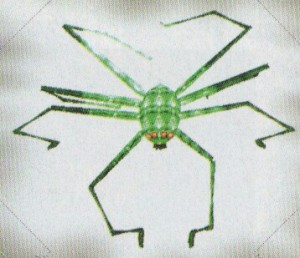 Thalang (TYPE G-3)
This zombie was made from a spider. It likes the smell of blood and machine oil. It will bang into you full force from any location, such as floor or ceiling. You will struggle to shoot it because it often move to the edge of the screen.

Special Thanks to Japanese HOTD fan 104_100111 for the tranlastion.

4 thoughts on “Creature Files: The House of the Dead”