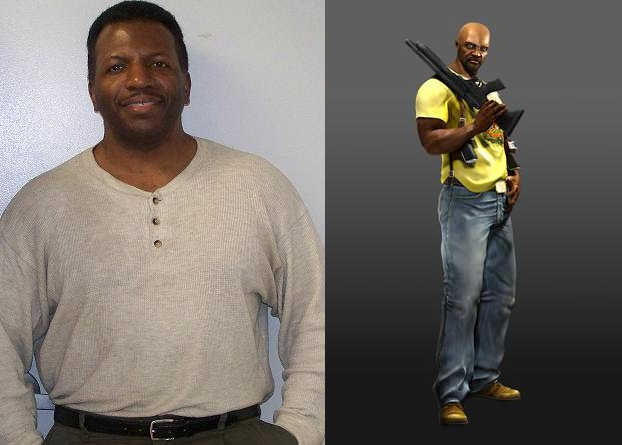 Anthony Aroya is a voice actor, screenwriter, and film maker for his company called “CYGNUS CREATIONS” in New York City. He also voiced the profane homicidal detective known as Issac Washington. I’ve chatted with him on the phone late afternoon and had a great conver “mutha fuckin” sation with him about his experience voicing the character. Later on, I’ve sent him the questions from you guys. Here’s the infinite Q&A of Issac Washington.

1.Issac has an extremely foul-mouth. Were all those f-bombs written in the script or did you ad-lib a bunch of them in there?

To be honest I’ve been known my entire life to use language that they don’t even use in the military! In part because was grandfather was the coolest dude I ever knew and he seemed to curse every other word around the house. So, I guess I took after him, both in good ways and bad. Got me in a lot of trouble when I was in school. But for the game, that was all Isaac and the script. Believe me, even I was surprised by the barrage of cursing Isaac did in the game.

2.Have you played any of the House of the Dead games in the arcade and Sega consoles basically familiarise yourself with the HotD series before taking the job?

Honestly not at all. See, I grew up in the height of the arcade craze. The 80’s were a time of going into the city and hanging out at the local spot, usually in Times Square, and wasting as many quarters as it took to beat the game. Or at least not look like a fool in front of your girlfriend. As times changed arcades went away and games became part of the household. In the 90’s I couldn’t put down the joystick because instead of quarters all I had to do was hit the reset button. How cool is that? I played a few of the HOTD games whenever I was out on the town and near a place that had the games available, but I didn’t play them to prepare myself for the role to any degree.

3.Are you a gamer and what other games do you play?

At this point in my life I’m not a gamer at all. I have seen some that are mind blowing and want to try them out, but once you get domesticated and raising kids, and other stuff that takes away from your own fun time you find your life taking a different turn. Man, I used to play games like Street Fighter and World Series Baseball until the skin on my thumbs started to blister. No lie.

4.Has your voice acting in HOTD: Overkill, vastly increased your use of profanity?

Funny question and I’ll relay this to the first question. I have been cursing like a sailor since the age of five, so I can honestly say that doing HOTD didn’t effect that part of my character at all.

5.Did you try out to voice any other characters besides Issac Washigton?

No, ol’ Isaac was the first and only character that I read for. But I “think” I may have toyed with the voice of Pappa Ceasar because they try to get the right feel for the voice match to a character. Once everything else begins to fall into place the whole recording process runs more smoothly.

6.What was your reaction to the House of the Dead: Overkill having the most profane language in a video game back in 2009 thanks to your character?

I’m actually laughing as I try to answer this question. See, it never, ever dawned on me that the character of Isaac Washington would have this kind of impact on the entire game. But once we were in the studio getting into it I was thinking, oh shit, this guy has some serious vocabulary anger issues. Has a side note that you may find interesting; HOTD is in the Guiness Book of World Records for most video game profanity. No lie. This was actually told to me by the producers, though I haven’t looked into it as of yet.

7.How was your experience with the character and working with the other voice actors (Will Sierra and Sarah Conner)?

You know as with any job, be it on camera, or in a recording both, you have to have a good back and forth with the other actors. I’m a firm believer in making as much eye contact as possible even when doing voice over. Perhaps even “more” when doing voice over because you can focus so much on the microphone and how you sound that you can forget that you’re supposed to be interacting with another person. I just think it makes the sound of what’s being said far more authentic doing that.

8.What are your thoughts of the character Issac Washigton, how do you describe him in your point of view?

As I was doing the character in the sound both, as with any character you’re doing, you start to get into the skin of it all. Meaning it was easy for Isaac to just curse a lot for cursing sake. But I began to wonder why so much? Was he raised around an older person who had a tendency to do that, as I myself was. Or is it a mask to cover up some kind of insecurity or short coming that he can’t or doesn’t want to address. As a voice actor and a screenwriter I can tell you right up front that verbally presenting my thoughts has never been an issue. But I can pull the F-bombs out of nowhere, in happy circumstances and not so happy. Maybe ol’ I.W. and I are more alike than I thought.

9.Would you like to see Issac Washington make a come back in future HOTD games?

Man, this question is the easiest one of all. I’d love to do Isaac again. Anytime, anywhere. I think most people who play the games we voice over don’t realize how we bond to a character and keep that as a part of us, even after the job has long since been finished.

10.What do you want to say to the fans in Issac’s words?

“I wanna thank all you wonderful mutha fuckas so fuckin much for showin’ me so much love! Shit, I feel like the fuckin prince a’ fuckin’ Persia…or some shit like that! Peace!”

If you missed my interview with Will Sierra, don’t give up hope as you can view it here. http://www.thewebsiteofthedead.com/?p=479

Thank you guys for submitting questions for the voice actors. Hopefully, Headstrong Games can give us a sequel with Will and Anthony reprising their roles again as Agent “G” and Washington in Vegas baby!