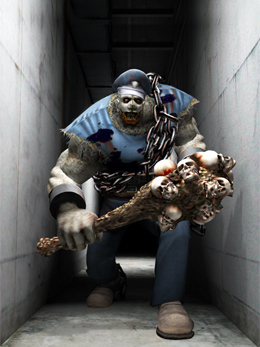 Death (Type 0011)
A security guard creature that protects the abandoned EFI research facility with a club made from flesh and skulls.

Encounters: Chapter 1 and West Wing (Optional next chapter)
Death is a brutal guard that chases you relentlessly with a gigantic club. Shooting its big, brawny body won’t do you any good. Aim for its head. That’s its weak point.

If you don’t cause enough damage to it before it closes in,
you’ll fall victim to its giant club. 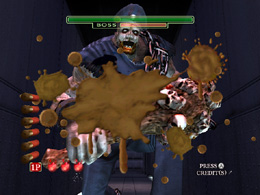 You’ll be fighting Death twice, but the basic strategies are
the same both times. You have to be careful the second time
it appears, though, because it’ll be chasing you behind obstacles,
passing in and out of view. Efficient timing of your reloads is key.

[1]Charges toward you and wallops you.
Death’s weak point, the head, only sways slightly as the boss runs,
so it should be pretty easy to target.

Death leaves itself open the instant it starts running this way.
If you reload before it gets started, aim upward in advance, and
shoot as fast as you can as soon as Death starts barreling
toward you, you should be able to stop this attack without
taking any damage. 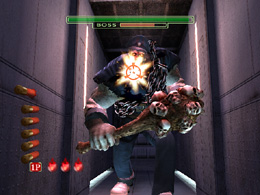 The time when you can really get some good damage in is
the moment it swings its club up to slam you. You’ll be
at point-blank range then, so you’ll be able to inflict maximum
damage. 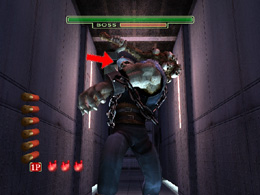 Even if Death gets too close for comfort, try to remain calm
and just keep getting in as many shots as you can until the
very last second.

[2]Chases you behind columns and then wallops you.
When Death is running behind the columns, its head barely
moves at all, so targeting it should be a piece of cake.

But figuring out when to reload isn’t quite so easy.
That’s because you’ve got to shoot when you can see
Death between the columns, or else the columns will
block your shots and you won’t be able to score any hits.
If you reload after Death goes behind a column, it’ll be a tough battle. 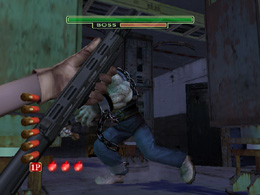 The key is to start reloading before Death disappears behind
a column,

and each time it appears again, get three shots in. 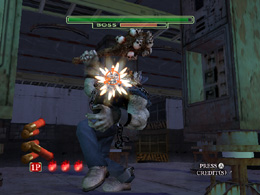 Kori’s bonus tip: You can rack up points when Death’s attack (yellow) gauge is down. Similar to Judgement in HOD2, where you can shoot Kural for more points.