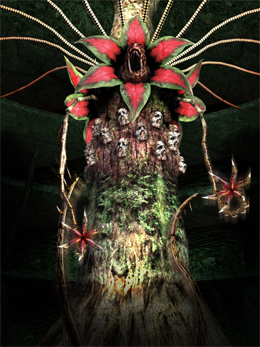 The Sun is a hideous, tree-like monster with countless faces
all over its trunk. Its weak points are its flowers, the tips of its
vines, and the tips of its roots.

You can also do a little bit of damage to the Sun by shooting the
countless faces on its trunk.
After you prevent each of the Sun’s attacks, go back to shooting
those faces non-stop. 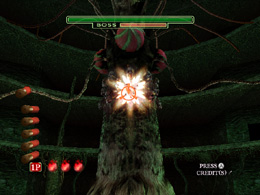 The Sun will first attack you with either its vines or its roots.
When its health drops to half or less, it’ll start attacking you by
either using pollen or by stretching out one of its heads at you.

The Sun has four attack patterns.

[1]Sends its vines to attack you. 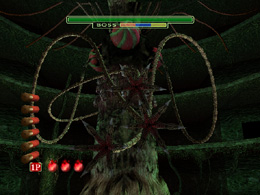 Each of the Sun’s vines has its own health bar, and they’ll
keep attacking you without mercy unless you defeat them all.
As soon as you’ve taken care of one, aim for the next one
immediately and get to work.

And by the way, when there are only two vines, they’ll each
have more health than when there were three vines, so be
on your toes.

[2]Sends its roots to attack you.

Sometimes the Sun’s roots will attack you one at a time, and
sometimes they’ll come in twos.

You can inflict damage on these roots even while they’re still
underground, so make sure you shave down their health as much
as possible before they pop up.

After that, the safest thing to do is to try to time your shots
so that you’ll blow the roots away as soon as they appear
aboveground. 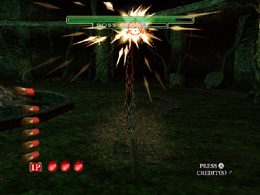 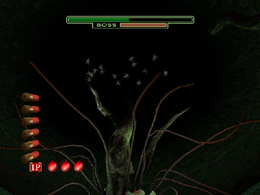 During this attack, you can get a little bit of damage in
even before the flower opens, so concentrate on shooting
the flower as fast as you can before it spits pollen at you.

Once the flower spews its pollen, quickly reload and
deal with the pollen itself.

Each pollen grain can be brought down with one shot,
but because there are so many of them, and because
they scatter all over the screen, you’ll most likely
take some damage if you just fire at random.

As soon as the pollen grains spew out, and before
they have a chance to scatter, fire all six of your shots
into the upper, central part of the screen to cut down
on their numbers. After that, you can deal with each
of the pollen grains you missed one by one.

[4]Stretches out one of its heads at you. 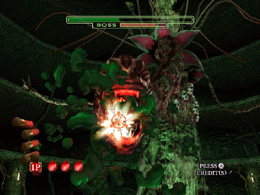 During this attack, the Sun will stretch out one of its heads
into fairly close range, so it’s the perfect opportunity to do
some serious damage. But you won’t have much time before
the head attacks, so just keep shooting rapid-fire and try to
make it retreat.