It’s been quite some time since the announcement of The House of the Dead Remake published by Forever Entertainment, the same publishers behind the Panzer Dragoon Remake. Today, Forever Entertainment released a new trailer for the upcoming arcade light gun remake that reveals new gameplay footage featuring our favorite characters in cutscenes, creatures, and the infamous voice acting from the original game remade from the ground up.

Towards the end, we can hear the voice of an iconic House of the Dead boss we know and love that has yet to be revealed in this trailer. The trailer also revealed the release date of the game which is set for April 7th with pre-orders opening on March 31st for the Nintendo Switch.

Hello AMS friends! Hope you all are doing well! If you love the soundtracks from the original two House of the Dead games, you are in luck as Cartridge Thunder will be releasing vinyl sets of The House of the Dead 1 & 2 set to be released Feburary 2022 featuring:

There will also be a Twitter giveaway this week for everyone to participate in for a chance to win the vinyls so be sure to follow us on the site’s Twitter account for more details.

Pre-order the vinyls of your choosing:

The House of the Dead

The House of the Dead Box Set

It’s official! The House of the Dead: Remake was shown on Nintendo Indie World showcase and will be available for Nintendo Switch. The game will be published by Forever Entertainment and developed by MegaPixel Studio, the developers behind Panzer Dragoon: Remake and will feature the classic arcade rail-shooter gameplay with a whole new entourage of updated graphics and gameplay changes to suit modern gaming standards.

Release date and other console release for the title has yet to be announced. We will update this article when more news arrive. You can follow the game’s social media outlets to be keep up to date!

The SEGA Forever social channels enters into the territory of THE HOUSE OF THE DEAD series as part SEGA 60th Anniversary celebration with tons of interesting trivia on the classic arcade light gun shooter including console ports, plot points, and easter egg appearances in other SEGA titles. Check out the video above and be on the lookout for more SEGA Forever retrospectives!

Special Thanks to Danny from SEGA of America for giving me the opportunity to help with this video!

This is a roughly translated version of The Sub Story to the original House of the Dead roughly from the Japanese Sega Saturn Perfect Guide. Illustrations done by Lisa Lee.

Below are excerpts from Thomas Rogan’s note.

[Study of Dr. Curien]
Dr. Curien was trying to gain the power of God. A quarter century ago, humanity had already begun to regenerate material, that is, to make perfect copies. He also scientifically mutated and created forbidden “life” and planned to put “life” on Coby itself. And based on that copy that “the life” lived in, he was trying to create a living being. It was his study that was pushing like crazy in DBR corp.This plan was being carried out secretly by Dr. Curien, but excessive research is known to the government, DBRcorp. Suddenly had been dismissed.
[Purpose of Research]
After the director’s dismissal, Dr. Curien was secretly studying in his hall to create creatures. It was also around the time when his son, Daniel Curien, died of an unknown disease. Sudden by the director’s dismissal and son’s death, Dr. Curien begims to have strong distrust of humans. The purpose of the research was to develop an organism that could stand above man for the sake of human hatred and resurrection.
[Living organisms to above humans]
The creature Dr. Curien is trying to create. Human beings have been the at the top of the food chain for a long time, but he was also trying to create a creature to be above human beings. Of course it was for hatred and revenge against humans. In addition, it was a creature called Type 00 “Magician” that became the first creature to stand above the unfinished organisms. Dr. Curien made it possible to command the “Magician” at his own discretion, but it seems that the program was secretly changed by a mysterious man.
[Mysterious Man]
The mysterious man who appeared in front of Dr. Curien after the director’s dismissal. He tried to create an organism to stand above human beings as well as Curien. I don’t know what it’s going to be, but apparently it seems that he creates creatures for a different purpose than Curien. The mysterious person who never showed up at all in the case at the Curien Mansion. DBR Corp. It is said that he was responsible for the abduction of a researcher inside the mansion.
[DBR. Corp]
DNA Bio Reacter Corporation, a research institute for biological research, mainly for genetic and DNA recombination research. It is a government research institution, and it’s activities are partly open to the public. Also, the research process has been reported to government agencies on a sequential basis.
[DBR. Researcher]
The research on DNA Bio-Reacter is mainly carried out. Their research themes vary, however, they intervene in unknown fields such as “Catalog of human genome”, “Proof of biodeterminism”, “Intervention to DNA somatic cells”, “Existence system of acquired RNA” and more. The researchers at the Curien Mansion were abducted and forced to engage in research by Dr. Curien, but there was a tragedy that would be attacked by zombies when it was used late in the study.

Hello AMS agents! Kori here to give you all a few updates to The Website of the Dead. I’ve been working with a top score HotD1 player, Egregiousguy, in the USA to work on a high score guide for each chapter in the original House of the Dead game (which you can find under chapters) as we prepare for the upcoming remakes by Forever Entertainment. Other games in the series will follow suit in given time.

I’ve also added a fan art section for the community fanbase from around the world to share their own HotD artwork. If you would like to submit your own House of the Dead fan art, feel free to send a direct message to WotD Twitter!

Welcome to The House of the Dead Community Fan Art section where fans of the series from all over the world can submit their House of the Dead fan art to The Website of the Dead. If you want to submit your fan art, send over a direct message on Twitter!

The attraction will replace The House of the Dead 4 Special, an updated version and side story to the fourth game, which stopped its operation recently this month and will feature a shooting ride theater type attraction with the capacity of 12 players (4 players each on 3 screens). The objective of the attraction is to work together as a team by shooting down incoming creatures and bosses in a building while obtaining the highest ranked score. Check out screens of the attraction below the article!

Hello friends in the HotD Community! I’m here to wish you all a Happy Halloween. With the remakes of the first two games in the series in development by MegaPixel Studio and published by Forever Entertainment, I went ahead and updated the game pages for both games all this month with their own chapters, endings, gallery, music, cheats, artwork and trivia sections with high score guides coming soon on a later date with the help of skilled players in the community for newcomers introduced to the House of the Dead series.

Other House of the Dead games that came after the first two will also be updated in a similar fashion. Feel free to navigate through the pages and Happy Halloween from The Website of the Dead! 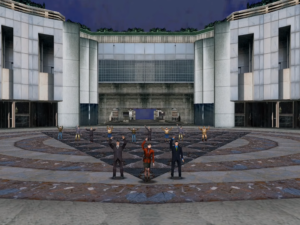 Occurs after beating the game under 80,000 pts with continues. You will be thanked by the people and fellow agents you’ve saved. 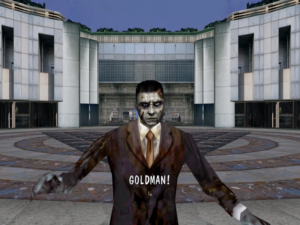 Occurs after beating the game under 80,000 pts with the last digit being 0 with Goldman resurrected as zombie after his suicidal fall. 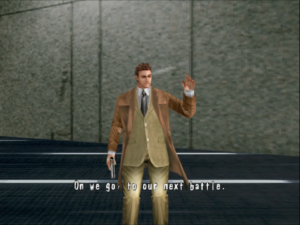 Occurs after beating the game over 80,000 pts with the last digit not 0. You will be greeted by AMS Agent Thomas Rogan, a key witness of the 1998 Curien Mansion. He will lead you to the next battle ahead.