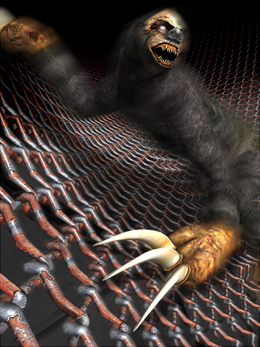 The Fool is a huge, sloth-like monster. But despite its appearance,
it can attack with surprisingly nimble movements. Its weak points
are its right hand, right foot, left hand, and left foot.

Unlike other bosses, the current weak point (one of the Fool’s
hands or feet) will be marked throughout your battle against this
boss, so you’ll be able to tell at a glance what you should be
aiming for.

But the Fool’s weak points are small, and move around quite
a bit as the boss moves. And to top it all off, unless you keep hitting
these weak points dead center, you won’t do much damage.

What you need when you go up against the Fool is accuracy and
quick marksmanship. Aim carefully at the weak point mark and never
lose your focus.

The Fool has six attack patterns.

[1]Claws at you with its right hand. 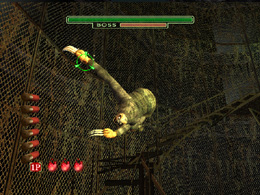 During this attack, the Fool doesn’t move all that much, so
it ought to be pretty easy to target its weak point. If it manages
to hit you at this point, you probably won’t have much luck
beating it. Just keep your cool and deal with the Fool calmly here.

[2]Claws at you with its left foot. 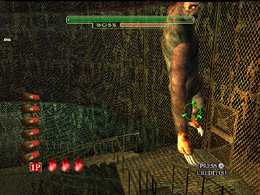 During this attack, the Fool’s weak point, its left foot, will
swing left and right in the area diagonally down and to the
right of the center of its body. Your field of vision will sometimes
be obstructed by the stairs, but you’ll still be able to get some
damage in even then. Just stay focused and keep shooting.

[3]Drops corpses on you. 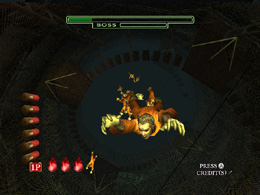 Corpses will rain down on you from above one after another, but
if you just concentrate on firing into the center of the group
of bodies, you should make out all right. The corpses that drop
at the outer edges of your field of vision will miss you, so ignore
them and just concentrate on taking care of the ones in the center.

[4]Claws at you with its right foot. 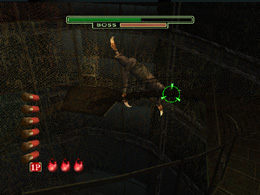 The right foot weak point will swing from the center right to
the center left as the Fool’s hip pivots. It won’t move all that
fast, so if you keep a level head and keep shooting, that ought
to do the trick.

[5]Claws at you with its left hand. 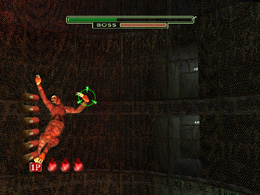 During this attack, the Fool will climb toward you along the cage,
making big movements with both hands. Its left hand weak point
will be swinging violently, so it’ll be tough to keep your sight on it.
Just aim for either the left or the right end of the hand’s swinging
arc. 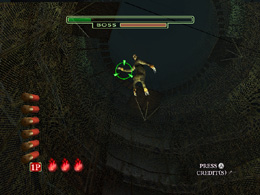 During this attack, the only chance you’ll have to attack is the
tiny fraction of time when the boss is in the air and is about to
attack you. And you won’t have any time to reload during that
moment, either. On top of all that, you won’t be able to stop the
Fool’s attack unless you land all six of your shots, either. This
attack pattern is a tough one.

Reload before the Fool jumps, and place your shots carefully,
aiming a little to the left of and above the center for the first
shot, and then shifting your sight down slightly with each of
your next shots.

Kori’s tips: After the first and very last cancel attack, you can still damage the Fool and score more points.