“Dogs of the AMS… Time they made a move.“

The state of the city was very similar to the horrendous Curien Mansion incident that took place in 1998 … Unless if you can rescue the people of the city who had yet to escape, you have to suppress the city’s confusion and aim for the Sunset Bridge…

A giant minamata creature carrying a trident is “HIEROPHANT”. The weak point is the heart covered with hard skin. Be careful because all bullets shot at locations other than the heart will be shot.

Tips
Since “HIEROPHANT” approaches and attacks with a spear,
it is necessary to shoot the heart surely . Remember the timing of opening, and aim at a few shots instead of firing continuously
. 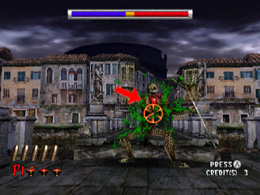 If you reduce its health by almost half, “HIEROPHANT” will
attack by summoning Mofish at you . It is difficult to counter all Mofish. In
order to finish the attack of Mofish as soon as possible, it is good to aim and damage the heart immediately after moving to this attack . 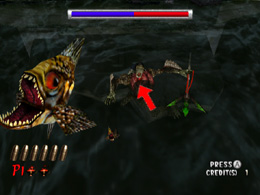 Concentrate and shoot down the Mofish that fly onscreen. If you can, aim for the heart in the meantime. Even if the attack of the Mofish is over, guarding is forbidden. This time “HIEROPHANT” will jump big and aim for you. You may be confused by the big movements at first, but if you start falling from the top of the jump, you can shoot down if you aim at the heart . 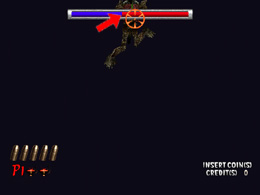 It’s a position where you can’t see the heart, but won’t hurt to rapidly fire.

There is timing involved in order to shoot the heart even after “HIEROPHANT” has landed or received damage. Pay attention to it’s chest.

Depending on the route, you may face up on the pier. The attack pattern and the timing at which the heart is exposed are slightly different, but the
basic strategy is the same.