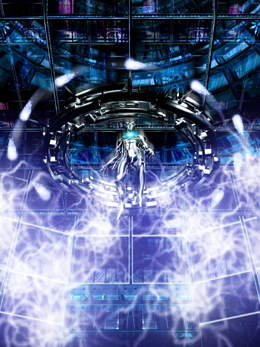 “I am Curien… I shall destroy everything and resurrect everything…”
The Wheel of Fate’s weak point is the glowing white
symbol in the center of its chest. Not only is this weak
point very small, but your bullets will just ricochet off
when the Wheel of Fate has its back turned or when
its wheel gets in the way, so it’s going to be tough to
land hits.

Because the Wheel of Fate has so many different attack
patterns, you’re going to need it all in order to survive:
speed, accuracy and precision timing of your reloads.
You also have to be able to tell what attack is coming
next just by watching the Wheel of Fate’s movements,
and be prepared for that attack.

The Wheel of Fate has five attack patterns. At first, it
will switch between Attack Patterns 1, 2 and 3 at random.
When its health drops to half, though, it’ll use its light
sphere attack. When its health falls to one-quarter or
less, it releases its lightning bolt attack.

[1]Throws rings of light at you. 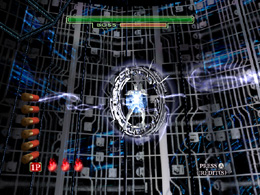 <
While the Wheel of Fate charges up energy, it curls itself
up and conceals its weak point, so you won’t be able to
get any shots in. Just steel yourself and get ready for your
chance to attack.

Once the Wheel of Fate starts firing its rings of light, it’s
time to start shooting. These rings will approach you from
the center, arcing left and right.

First of all, aim for the center and quickly fire all six of your
shots. Then immediately reload and take care of any rings
you missed. If you get the chance, also try to hit the Wheel
of Fate itself, which will be far back in the center. 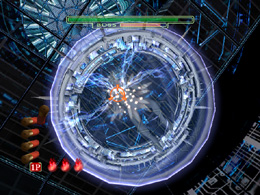 During this attack, the Wheel of Fate will approach you
directly, so it should be easy to target. But even if you
land all six shots perfectly, you still won’t be able to drive
the Wheel of Fate back.

To avoid having to reload needlessly, wait until the Wheel
of Fate faces your way, and then get your shots in all at
once when it draws near.

[3] Flies around at high speed. 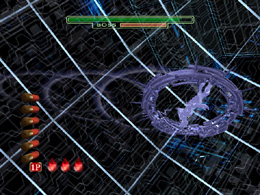 This attack will test your marksmanship. You’ll have to
try to hit the Wheel of Fate’s tiny weak point as it goes
zipping around at high speed.

The Wheel of Fate’s wheel will obstruct its weak point,
and the boss will turn its back on you sometimes, too,
so there won’t be many opportunities to get your shots in.

So that you don’t waste the precious few chances you
do get by being out of bullets, avoid shooting repeatedly,
and track the Wheel of Fate’s movements carefully with
your eyes.

If you’re having trouble tracking it while it’s moving
around so fast, you could try just targeting the times
when it pauses for an instant, but be prepared to take
some damage.

At the end of this attack, the Wheel of Fate will try to
hit you with a body slam. 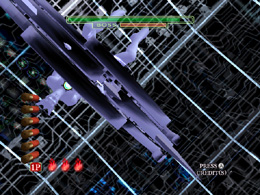 At the last instant of its approach, it’ll be at point-blank
range, so it’s a great chance to do some major damage.
So even if it gets really close, keep shooting and don’t
give up.

[4]Shoots light spheres at you. 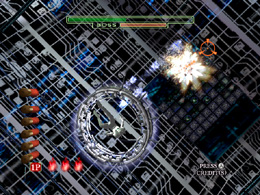 While the Wheel of Fate is busy making its light spheres,
try to get as many shots into its weak point as you can.
Reload when it starts shooting those spheres at you from
its wheel, and take care of them quickly as they come
flying toward you.

Because the light spheres move fairly slowly, you’ll probably
be tempted to get in some shots at the Wheel of Fate itself
during the intervals, but if you press your luck like that, you’ll
quickly end up taking unnecessary damage from the light spheres.

So ignore the Wheel of Fate for now, and just concentrate on
the light spheres. You can go back to targeting the Wheel of
Fate’s weak point once you’ve wiped out all of the spheres.

[5]Fires lightning bolts at you. 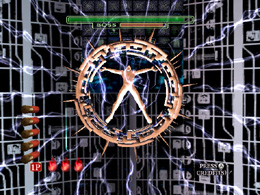 Once you get this far, you’re almost home free.
At the beginning, focus all of your attention on firing at the
Wheel of Fate’s weak point as many times as you can until it
releases its lightning bolts.

Once it does, reload just as you are turning around and start
shooting those lightning bolts down immediately.

There’ll be a lot of lightning bolts to deal with, so start shooting
in areas where they’re closely clumped together to pare down
their numbers a little. After that, take care of any lightning bolts
you missed one by one.

Sure, there’ll be a lot of lightning bolts, but they won’t be
very fast. If you stay calm and just keep shooting the ones
closest to you, you won’t have all that much trouble shooting
them all down.

Once you’ve wiped out all of the lightning bolts, you’ll turn
to face the Wheel of Fate once more. Start firing at it again
with everything you’ve got and make victory yours!

Kori’s tips: In Time Attack Mode, each shot in The Wheel of Fate’s chest during his attacks will give you +2 secs each shot.