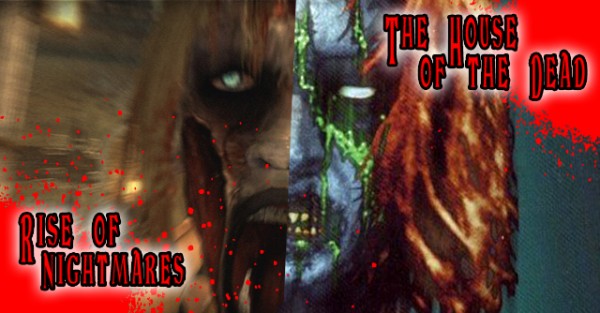 A fellow friend of mine, Barry the Nomad, from SegaBits made a interesting blog post which is one of my favorites on SegaBits and I wanted to share this article with other fans of the HotD series. In this article, he gives us comparsion between these two games explaining how both games have similar settings to one another. Interesting fact: Rise of Nightmares was created by the AM1 team, the same people that brought you The House of the Dead and was suppose to become a HotD game but was dropped as a idea to become Rise of Nightmares. Here’s the intro

“I’d think any true blue SEGA fan has a special place in their heart for The House of the Dead franchise. Being an arcade lightgun classic, and spanning three console generations, The House of the Dead has produced a number of sequels, spin-offs and even ventured outside of the video game world by way of two horrible films. When Rise of Nightmares, SEGA’s latest Kinect title, was revealed at last year’s Tokyo Game Show, little was known of the game aside from “save your wife from an evil scientist”. Was it internally developed? Was it a House of the Dead title? We just couldn’t tell based on the short and creepy trailer. But now that time has passed, and the game is in stores, we have all the answers. In this week’s Weekly Five we’ll take a look at five reasons why I think Rise of Nightmares sits well alongside the beloved House of the Dead series, despite not carrying the series title, and why HotD fans should check the game out! ”