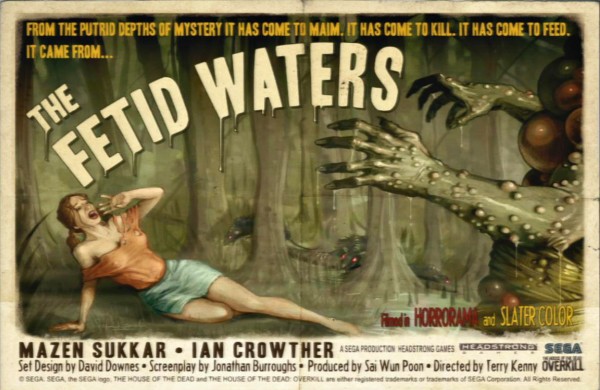 Picking up where we left off, here are more crazy HotD advertisements by SEGA

English of the Dead is a direct spin-off to Typing of the Dead, which is also a spin-off to The House of the Dead 2. But, instead of typing to blast zombies away with the keyboard, you use your stylus on the DS by writing letters in English (Death Note spoof). The only flaw is that its a Japanese exclusive, but you can always import it and play it on your original Nintendo DS. Other than that, this trailer shows how much Sega is advertising this game from zombies in tutus to Goldman holding a baby David zombie. This game looks quite enjoyable and funny to play. Check it out if you want?


You may know these two main characters Zobio and Zobiko from Sega’s All-Stars series, Sonic & SEGA All-Stars Racing. If your wondering where they originated from, these two love birds first appeared in Loving Deads: The House of the Dead EX where they must escape from a mad scientist and spend the rest of their lives together. The trailer shows us the story of the game as mentioned before and then cuts to the gameplay with the House of the Dead 4 theme playing at a faster rate. If you thought Typing of the Dead and English of the Dead were wacky, this game is WAY beyond wacky. This game is basically a party game where you play different types of mini-games like brushing Justice’s teeth, catching apples, zombie sumoing, and AM1 even referenced The Matrix where you have to dodge pies in bullet time. What’s even more funny is that Zobio is wearing Neo’s clothes, while Zobiko is sporting Trinity’s trends. With SEGA porting The House of the Dead III & 4 to the PSN, there might be a possible chance that this game will be ported as well.

BRTUAL… SHOCKING… UNREAL… The Hardcore you’ve been waiting for.


To close this showcase, I present to you The House of the Dead: OVERKILL. The game was created by U.K. studio Headstrong Games and published by Sega. This game is also a prequel to the very first House of the Dead game. Sega hired Headstrong Games to create a new HotD game for them with a different style and setting. Headstrong Games decided to make it a gritty, grind house, double feature style video game with more adult content and extreme use of gore. Not only did they do that, they’ve also added new characters and written the story. But which shocked fans like myself was the profanity such as the word “Fuck!” This was very unusual in a House of the Dead game, but fans did enjoyed the comedy. This trailer made by Sega definitely shows that this game is the hardcore you’ve been waiting for.

Bonus: Even though this isn’t HotD related, this is by far the most interesting trailer of Rise of Nightmares.