The House of the Dead is a light gun shooter developed by Sega AM1 for the Model 2 arcade hardware. The game is similar to one of Sega’s other titles such as Virtua Cop where players must shoot the enemy target and save as many innocent people as you can. However, the enemies are not human, their the undead created by a mad scientist who wishes to eliminate the human race. As an agent, you must stop him, gun down his evil creatures, and save as many scientist held hostage as you can, including the main protagonist’s girlfriend, Sophie. The game also has a unique branching system where you can choose a path around the mansion depending on your choice. Remember not to go into the house… alone.

Story
Japanese Arcade story
“The House of the Dead” is a terrifying and exciting shooting game in which you gun down living corpses in a house of horror. You are a special investigator sent to rescue a captured research worker, but in the course of your ordeal you’ll learn the secrets of the House whether you want to or not…
“On December 18, 1998, the most ghastly incident of this century occurred.
How will the plot unfold?
What will be the fate of the research worker and his fiancee Sophie?
Gun down all the creepy inhabitants as you try to unravel the puzzle!
But no fair covering your eyes!” 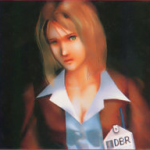 Creatures
Creature Files: The House of the Dead

One thought on “The House of the Dead”