“At last, you’ve come… friends. The door of fate shall open.“

Finally, we reached Goldman’s headquarters. There, an eerie creature that is completely different from the past is waiting. You can’t turn back anymore … The last battle for the human race survival begins …

Created by Goldman, this creature must be at the top of nature.
That is “EMPEROR”.
The weak point is the red core that is visible in the center of the transparent body .

Unlike other bosses, you can cut down on its health as much as you shoot, so you’ll be able to test the “accuracy” and “fire power” you’ve been using so far .

“EMPEROR” attack patterns can be broadly divided into three types. 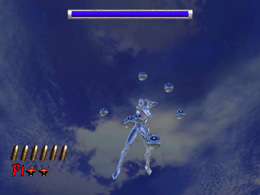 One hand is pushed out before the attack.
Be careful because the speed of the sphere changes depending on the difficulty.
Spheres can be shot in one shot, so deal with them without rushing. 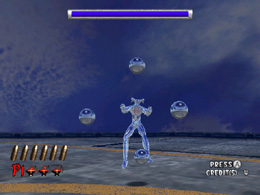 When shooting spheres simultaneous, “EMPEROR” pushes
out both hands before the attack . There is no change in speed when the spheres are shot simultaneously. 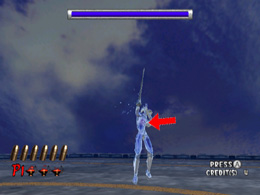 When it prepares rush, the “EMPEROR” will accumulate energy before the attack, so you can shoot a lot in the gap . If you
fire the core while its wielding a sword, you can stop the attack.

If you reduce it’s health by about 30%, the attack pattern of the “EMPEROR” will change,
and will attack you by changing into the bosses you’ve have fought so far. 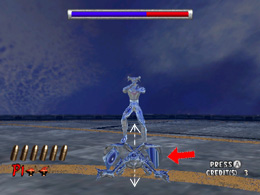 This pattern is always used when a bullet reaches the core during JUDGMENT charging.
There is no pattern of turning left and right, so fire in the middle . 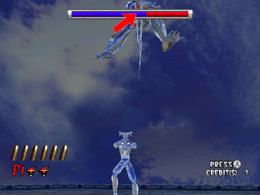 jumps high and tries to poke a spear.
There is no opening and closing of the chest, so you can just shoot at the core .
It’s the easiest pattern to deal with. 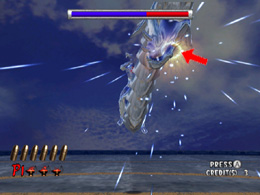 Once it tilt its neck to the right and start to hang from the top, it is important to aim at the moment you turn right .
The aim is fixed at the upper right corner
toward “EMPEROR”, and when “TOWER” starts moving , try to shoot the place continuously .

○ The point is to aim around this 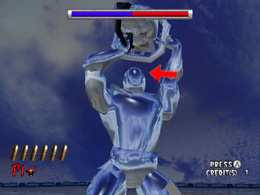 forehead slightly above the STRENGTH head .
You can shoot only for a moment before the chainsaw can hit you, so the
timing is considerably severe compared to other dummy attacks. This is the most difficult pattern to deal with.

[3] Rotation attack When the 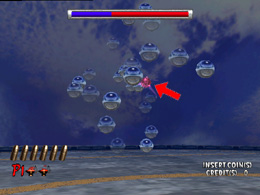 When the remaining health is about 1/3, it becomes only the core and
rushes with a bit that rotates around .

It is necessary to aim well because the core is small, but if you aim calmly, you can easily deal with it. If you get to here, you win.