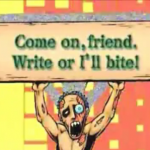 Sega has some interesting ideas when advertising there games back when they were in the console business, even until now with games like Sonic Generations and Rise of Nightmares. But when it comes to The House of the Dead, Sega has some awesome and yet obscured commericals for this franchise. First let’s take a look at the awesome

SEGATA SANSHIRO vs. The House of the Dead

This awesome shows the karate Sega Saturn holding martial artist Segata Sanshiro fighting against Curien’s mad experiments. He does fend them off with his signature judo flip, but they continue to rise and surround him. Probably shows that Segata can’t force them to play the Sega Saturn. For those who don’t know who Segata Sanshiro is, he was a character that was created by Sega to promote the Sega Saturn and all of its games in Japan portrayed by Japanese actor  Hiroshi Fujioka, who was also know for playing Takeshi Hongo in Kamen Rider. On to the next commerical.

Talking about Zombies in the office

My Japanese is SO rusty, that I won’t be able to translate what they are saying, but it seems that they are talking about zombies in the work environment. It seems that office ladies enjoy blasting away zombies with the Dreamcast light gun in The House of the Dead 2.

Most Dangerous Enemy Mankind has ever encountered

This commerical is not weird or obscured in anyway possible. It shows Thomas Rogan’s daughter Lisa and former AMS Agent G blasting through the EFI Research Facility with a man narrating “Most dangerous enemy mankind has ever encountered”. Ending with Lisa saying “Had enough yet?” and reloading her shotgun LIKE A BOSS.

For some reason, I am unable to find this commercial on Youtube, but I can describe it a bit. It first begins with three old Japanese women with shopping bags running around the mall screaming “possibly zombies which they are no where to be seen” so the other people around them are looking at them funny. Then it cuts to the actual gameplay of The House of the Dead 4.

That’s it for now until part 2 of commercials and trailers of The House of the Dead. The next set are even more wackier than the ones before. Ready for some zombie lovin’ and zombies teaching you english on your portable device? Stay tuned.